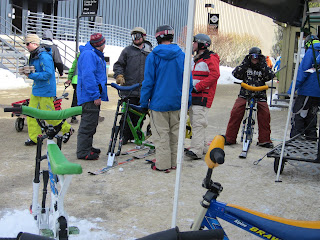 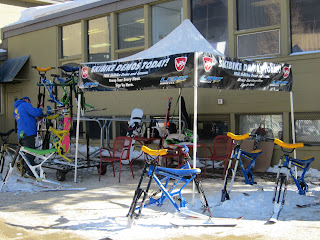 Lenz Sport Skibikes are an integral part of Winter Park Resort's Ski & Ride School. During the SIA On-Snow Show (Snowsports Industry of America) the largest snowsport trade show in the USA, free demo's and lessons were offered on Lenz Brawlers and Launches.

Skibike demo participants received a free 1.5 - 2 hour lesson from Winter Park Resort skibike instructors. People came from a variety of states. While most were from 'ski states', a number were from the midwest and overseas. New skibike converts came from Ohio and Slovakia.

Feedback from demo participants was 99% positive. Most came back from the lessons with ear to ear grins. A few begged to be able to take the bikes out by themselves afterwards. After leaving driver's licenses and a credit card, they were accomodated.

A number of ski vacationers who couldn't work in a free demo on Monday or Tuesday elected to sign up and pay for lessons later in the week. They were given Preferred Customer Gold Cards to receive $20 off their lesson.

All comments are moderated before being posted.