The new Winter Park Resort skibike video is out

And it tells the overall focus of the Ski + Ride School skibike instructors.  We welcome everyone.

Now is the time to stop with the painful skiing.  Skip the falling in beginner lessons.


Trevor looking for his next big hit.

Learning to skibike is easier than it looks.  That said, it still takes lessons to learn to ride a skibike safely.  Riding them is not like riding a bicycle nor is it intuitive.

Most beginners try to start off carving the skis instead of skidding the skis.  This leaves the riding unable to slow down or stop.

In a lesson, you'll learn how to skid those skis using a proper combination of stance and tilt the handlebars downhill.  Having learned the skidded traverse, it's on to the J-turn.  One then combines both of those into skidded turns.

Falling rarely happens in a skibike lesson.  One has more mobility in snowboard boots.  Boot and helmet rentals are included in the lesson.  Opt for a regular ski helmet or use a full-face downhill mountain bike helmet.  Don't forget your eye protection.

There will be complimentary skibike lessons at Winter Park Resort on Sunday January 22, 2017 courtesy of Lenz Sport Skibikes and the Winter Park Ski + Ride School.

Minimum age is 14+ for participants.  One will need a valid lift ticket.  Guardians will need to sign the liability release form for minors. 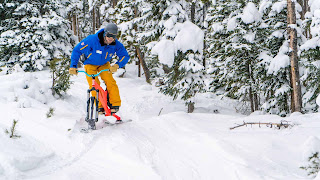 The lessons will last 1.5 hours and the demo's will run from 9am to 4pm.  Space available on first-come basis.

New skibike license holders can rent a bike for the rest of the day or come another day.

The license does not expire at the end of the season.  Hold onto it for future seasons.  If one loses it, go to guest services and have another printed out.  It is a picture license.  Only the person on the picture can rent a bike.

More information can be found here.

The original Winter Park Ski Train ran for most of 69 years.  It stopped in 2009.  I was fortunate enough to work on it a few times selling lessons for Ski + Ride School on the trip up. 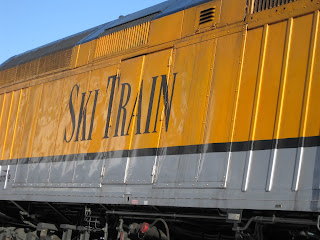 I was gutted the day they said the train was sold.   It was a Denver tradition for many years. 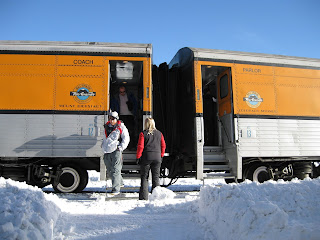 After a false start and insurance squabbles, the Ski Train is reborn in 2017 as the Winter Park Express.  The new train is run in partnership with Amtrak, Centurylink, and Winter Park Resort.   The new 1.5 million dollar heated train platform was funded by a partnership of organizations.

The new train departs from Union Station which was refurbished several years ago as a transportation hub.  A new rail line connects DIA directly to the station allowing airplane passengers to take a rail to rail connection to the ski area.

The Winter Park Express leaves Union Station in Denver at 7 a.m. and arrives at the base of the ski area around 9 a.m.  It can carry up to 500 people per trip.  It runs one trip per day on the weekends from January to March.  The California Zephyr runs the same route everyday but departs later and drops passengers off in nearby Fraser.

Here's a view of the new platform that I took on Thursday 1-6-2017 from the third floor of the Ski School Building.  As one can see, the view is blocked by the safety barrier and the resort got nearly three feet of snow.

A travel guide covered the first trip.  If one is curious about the process and the resort, the video gives a good overview.


There's plenty of room in the baggage car for skibikes.  One might want to bring some padding if you don't want the bike banged up.  One can also rent a skibike at the ski area if one has a Type II skibike license.   West Portal Rentals is located on the ground floor of the black building attached to the blue building where the train stops.

The cost of the train one-way starts at $39 which is less expensive than the local airport shuttle.  Holiday dates are more expensive.